When I was a young boy (not sure what age) I remember being in the family station wagon on a trip to Wisconsin from our home in Chicago.  During the ride through an rural industrial area, I noticed a set of buildings with two very tall “smoke stacks” protruding upward toward the sky. They were gray with several red stripes ringing them.  There was what appeared to be lots of smoke billowing out of them. Looking back it was probably steam. I asked my Dad what that thing was. He told me it was a Power Plant. Yep, a Power Plant. 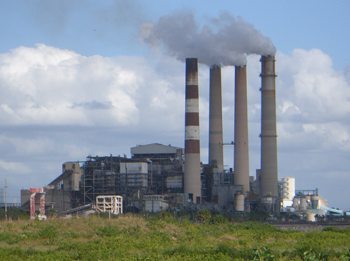 Over the past several years, the terms “Power” or “Powerful” have been used to describe golfers who can hit the ball a very long way.  Sometimes the term Powerful is used to describe the swing of someone who is able to get a ball in the air from very deep rough.  Often times we say someone has Power or is Powerful.  In 1986 when I created the GolfGym Training Product, we coined the term PowerSwing Trainer.

The truth is that, just like the Power Plant, a person doesn’t “have” power, they generate power. You might say that it is just semantics, but it is much more than that. The Power Plant generates power by using steam or nuclear reactions, or even by water flowing through it.

We as golfers don’t really have power, we generate it with our muscles through strength, proper movement patterns and balance. The amount of strength you have has a direct correlation to the amount of power you can generate. In the golf swing, we can add in proper sequencing with balance and movement patterns, but if you are not very strong, you won’t generate enough swing speed to have a “powerful” golf swing.

If the Power Plant has little steam, a trickle of water or fire crackers instead of nuclear reactions, it won’t be able to generate enough power to light a 10 watt bulb.

That’s why we are seeing so many professional golfers involved in a dedicated strengthening program. Every muscle in your body is activated during a golf swing. Just watch the slow motion video of Tiger, Bubba or Rory. They are swinging out of their shoes.

If you have an interests in starting a program, but don’t know what to do first, please check out our 3 Minute Daily Workouts (3 Minutes A Day)