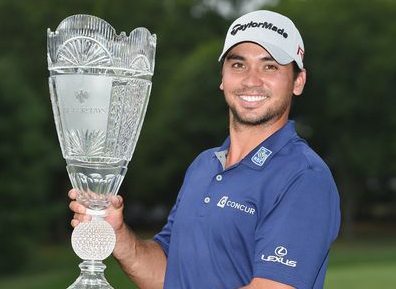 Have you ever watched Jason during his pre-shot routine? If so, you would have noticed that with the help of his caddie he chooses a target first.  Then he gets settled in behind the ball and does something I have not seen many other (if any) tour players do…he closes his eyes and visualizes his shot, focuses on where it is going to land, and how it will roll to the target.  I believe that his focus and visualization is a key to his performance this season.

In 2011 the movie “Seven Days In Utopia” was released. It was about a golfer having serious issues with his golf game, his caddie (his father), and the constant pressure of having to win to please his father.

Because of a car accident, the golfer, Luke Chisholm, ends up in a town called Utopia for several days and is tutored by a former PGA Tour pro, now old cowboy, who had his own struggles while on the tour.  The now older sage, passes along his wisdom through the acronym SFT which stands for See It, Feel It, Trust It.

In the movie, Luke is positioned behind a tree about 25 yards off the green and after being given a blank canvas, brushes and paint, is directed to paint on the canvas a picture of how he would visualize his shot to go around the tree and onto the green.

I believe that is what Jason Day is doing before every shot. He is painting a picture of the shot before him, getting it firmly implanted in his mind, then executing that exact shot to the best of his ability. He Sees It, Feels It and Trusts It!  When the picture is clear, it is easier to feel and trust the shot.

If you want to improve your performance on the golf course, I encourage you practice as much as you can focusing on the target more than you think about hitting the ball.  Develop a good swing, then start painting a picture in your mind of the outcome that you are seeking versus the process of the swing.

Thank you to Jason Day for demonstrating the power of SFT!