I received a call last week from a gentleman who sounded like he was a member of the “Seasoned Citizen” Club. (The first time I ever saw that term was in “The Little Red Book” by Harvey Penick).  He said that he had seen a video on our GolfGym Channel on YouTube, and wanted a little more information.

He asked me to explain the sequence in the transition from the backswing to the downswing to him…over the phone.  He told me that he had a little time before he had to take his wife to the dentist and was wanting the info that would surely change his golf game. There was a dead still on the phone.

Hey, I’ve been playing golf for about 50 years and I know a little about the swing, and I am TPI Level 1 Certified, and have invented some golf specific swing training products…but, explain the sequence of the transition from the backswing to the downswing…over the phone?  My first thought was to give him the link to Sean Foley’s Facebook Page.

I tried my best with the limited Swing Instructor vocabulary that I picked up over the past 50 years, but he wasn’t getting it. Then, all of a sudden he said, “My wife is out of the dentists office…gotta go…bye”, and hung up.  I had a pretty good chuckle over that call, but interestingly enough, just two days later, I came across a short video by Ben Hogan in which he demonstrated exactly what that nice gentleman was requesting. Here is that video.

As soon as I saw the video, I immediately thought of incorporating our PowerSWING Trainer and our NEW PowerSWING Plus into the drill to add resistance and get a better “Feel” for the movement. I knew that these products could help me get into that Ben Hogan position easily. The following video is a result of that idea. So, I prepared the following video with the Ben Hogan Drill using both the PowerSWING Trainer and the PowerSWING Plus. Ben Hogan was one of the best, if not the best, ball striker of all time.

I love this drill, especially using the PowerSWING Plus on my driver. The feeling is there and the movement is becoming ingrained.  I can’t wait to incorporate it at the range.  This is something that will take a little practice but will pay big benefits if you just give it a try.

Good Luck with this.
Ken 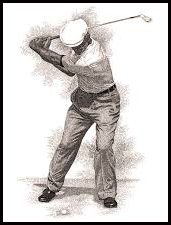